The ultimate tool to manage materials and maps in 3Ds Max®

Share the same library in a group via network or the internet.

Integrate Material Manager into a studio pipeline with Maxscript.

Connect with the online User Library, download over 160 materials for free and share your own materials and maps with others.

The VP MATERIAL MANAGER is the perfect tool to manage materials within 3ds max in ways never possible before. Material presets can now have ATTRIBUTES that can easily be filtered with the integrated attribute filters. The times are over where you needed to dig through folders to find the material you need. Just select the combination of attributes and the preset manager will just show you the materials that fit these attributes. Finding material was really never faster! 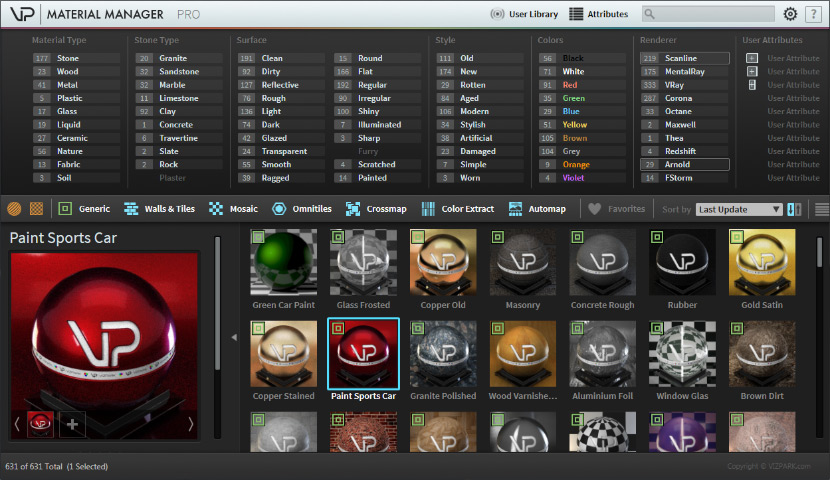 What is Material Manager ?

AND WHAT IS IT GOOD FOR

The VP MATERIAL MANAGER is a new innovative tool to manage materials, maps and bitmaps within 3DS MAX® in ways never possible before. Material presets can now have ATTRIBUTES that can easily be filtered with the integrated attribute filters. The times are over where you needed to dive through folders to find the material you need. Just select the combination of attributes and the preset manager will show you the materials that fit these attributes. Finding materials was really never faster!

But MATERIAL MANAGER has much more to offer. You can use the wild-card search with instant results that a blazingly fast, change and edit attributes, add comments, rate presets, create favorites and many more.

MATERIAL MANAGER is integrated directly into the VP Plugins with buttons for loading and saving presets. This way you don´t have to bother creating a new material or re-assigning a material to an object, just load a different preset and watch the result. 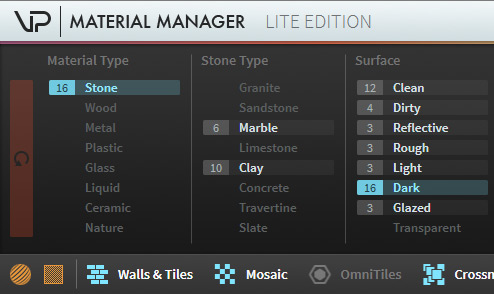 If you are looking for a material or map preset, you don´t want to waste time searching through several material libraries. The ATTRIBUTES section of Material Manager makes finding presets a breeze. Just click the attributes that describe the characteristics of your material and you´ll only see the results that fit. Filter by COLOR, TYPE, MAP OR MATERIAL, and even search live by just typing in the search field.

One preview thumbnail might not be enough and waiting for a preview to be rendered can also be annoying. With Material Manager, you can assign up to 5 preview images per preset, which can be enlarged for better viewing. 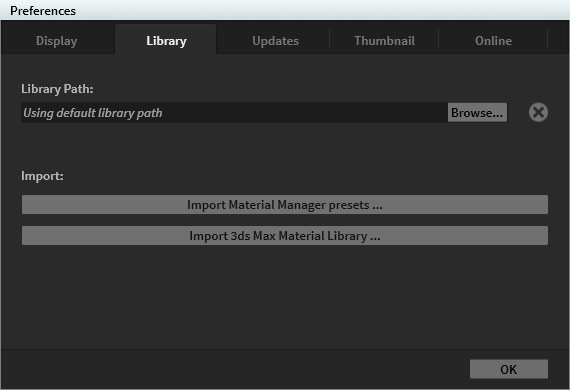 Material Manager offers two methods of importing presets and one option to export presets. You can import 3Ds Max .mat libraries and automatically render thumbnails for each of the presets. You can also export self-contained presets including the bitmaps for better exchange with colleagues or other artists. Just use the proprietary format .mmp to export one or more presets and import in Material Manager.

The online User Library provides a growing repository of shared materials and maps by other users and VIZPARK. Materials can be uploaded and downloaded with the Material Manager 1.1 LE which is included in the installation. To download or upload and share presets, a valid VP User account is required. 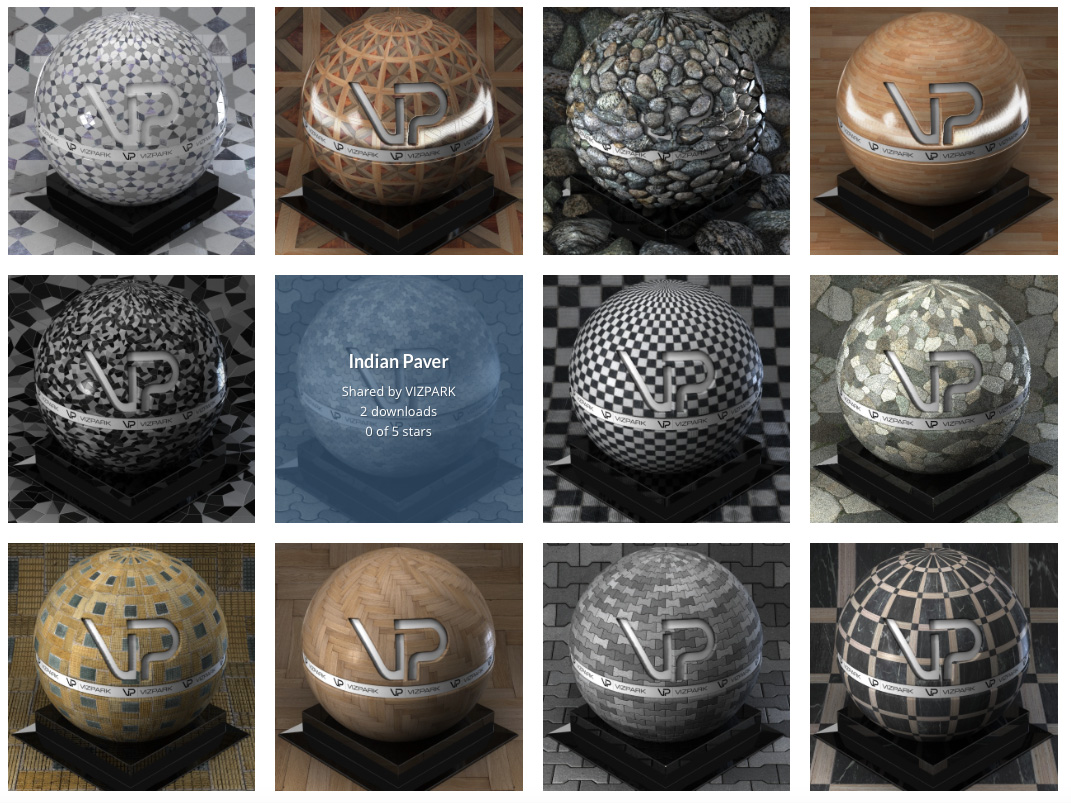 Material Manager development ended 12/2020. You can get a free version of it for up to 3ds Max 2021 on www.vizplugins.com

This 9 min. video shows how to install Material Manager (Pro) and how to set up the macro buttons in 3Ds Max. It also shows the difference of the Lite Edition and Pro version, and the first steps for a quick start.

This video is a short demonstration of how presets are loaded and saved with VP Material Manager. It shows how to load entire materials with Walls & Tiles and how to switch color sets with VP Color Extract.

This video explains how to add custom thumbnail previews for each preset, how to add multiple previews and how to create and switch to customized thumbnail scenes.

This video shows how to efficiently use the attribute filters, create your own User Attributes, use comments and search and the additional previews to manage presets efficiently and organize in better ways.

This 8 min. video explains how you can find and change the library location for the Material Manager (Pro) library. You´ll learn which files to move (and which not to move) and which preferences settings to change in Material Manager. 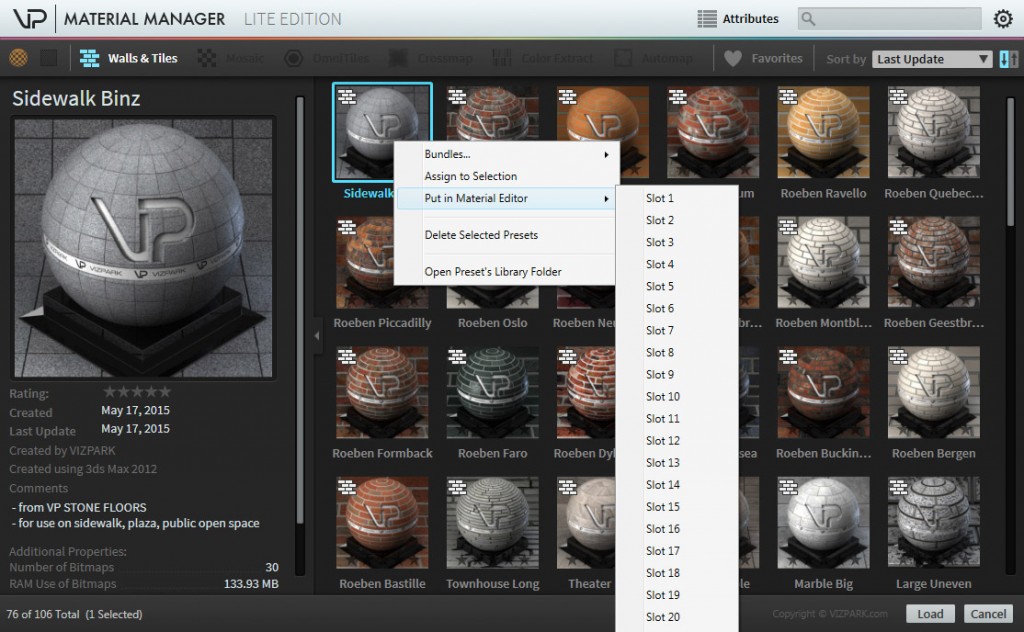 If you are stuck, you can also use the DIRECT SUPPORT form and send us your request.

What is the difference between LE and PRO ?
There are two main differences: 1) PRO can handle all materials that 3Ds Max can handle, while LE only handles presets from VIZPARK plugins. 2) LE is free with all VIZPARK plugins while PRO is a commercial (paid) product.
(License) How many installs / licenses are included in one purchase ?

One purchase includes one license. While this might look restrictive, you are free transferring the license from one computer to another with the License Manager application. There is no limit on how often you release / de-activate and activate a license as long as you´re just using one license at a time. The license can be activated on any computer with the same VP User Account (username and password).

(License) I´ve had to format my computer and now I can´t see a license ?

(License) Do you have a floating license server ?

No, we don´t have a floating license server, but we do support license transfers. Releasing and activating a license for any of our software products is very simple. With the License Manager 1.3.0 you can easily activate a license and release it. Releasing licenses can even be done remotely, e.g. if you had to format your computer and you don´t have access to the activated license anymore.

(Updates) Do I need to pay for updates ?

No, currently not. So far we never charged for any software updates in the past years. So if you have a perpetual license you don´t have to worry about paying for updates (1.x). We might consider charging for major upgrades though (2.x, 3.x, etc.).

You don´t need software licenses or activations for rendernodes. All our plugins render without a license in rendernode mode, which is when the plugin is started via backburner or distributed rendering on a rendernode machine.

Let us know what you think...

What others are saying